By Patty Talahongva
Generations of students attending Madison Simis and Madison Meadows schools have stories of John Murphy Jr., a teacher who taught them so well that many still have vivid memories of what they learned from him. 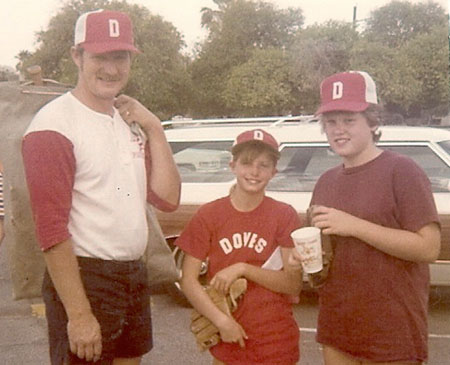 John Murphy Jr. was not only a primary school teacher and a Scout leader, he also coached softball for many years. His two daughters, Jennifer, center, and Jane, right, enjoyed having him as a coach for their Doves softball team (photo courtesy of the Murphy family).

Thanks to the Madison Simis Alumni Facebook page, those former students were able to express their love and thankfulness to his family following the recent passing of their favorite teacher. His son, John Murphy III, says his dad had just been diagnosed with stage-four liver cancer. He passed away less than three weeks later, on July 12.

Murphy and his wife, Judi, moved to the Valley when he was hired by the Madison School District in 1965. The couple lived in a house near 7th Street and Northern Avenue for more than 40 years.

Murphy taught third and fourth grade at Simis for nearly 20 years, and then transferred to Madison Meadows where he taught fifth grade for 10 more years. He also coached little league and was a leader for both the Boy Scouts and the Girl Scouts.

“His commitment to students didn’t end when he left his classroom; he also devoted countless hours as a Scoutmaster, a Little League coach, and, even though he didn’t have any prior experience, he stepped up and served as the Central High School swim coach in the early ’80s when no one else would take it on,” says his son, Jeff Proctor-Murphy.

“Mr. Murphy was a wonderful teacher,” posted Alex Benchimol. “I, for one, was a serious underachiever in his fourth-grade Simis class, 1978-79, but he made it clear to me over a lunch in the cafeteria that he had faith in me, even if my performance in his home room didn’t warrant it. I now live half a world away in Scotland, and teach at a very old university, but I think of Mr. Murphy as my original, best, and most inspirational teacher.”

Another student who took his class in the early 1970s says she has Murphy to thank for her becoming a pilot. She wrote to his family telling them he made her believe girls could do anything boys could. That pep talk changed the way she viewed herself and her capabilities.

“A common sentiment shared with us by many of his former students was that he believed in them and that, in turn, made them believe in themselves,” says his daughter, Jane Scott. “He had a way of being there for everyone, making each person who came in contact with him feel special and glad they knew him.”

“As we were growing up, he knew we weren’t going to be perfect and that we would make mistakes along the way, but he stressed honesty, honoring commitments, and doing the best you could.”Former student Lynn Barclay recalls that, “Mr. Murphy introduced me to the magic of Rudyard Kipling (whom I have subsequently shared with my daughter), the ability to think critically and thoughtfully.” She says she still has a note he gave her in fifth grade and it sits on her desk.

Murphy also remembered many of his students over his long career, as demonstrated by frequently running into them in the North Central community.

“What we found remarkable was our dad’s memory for his students,” Jane explains. “Not only their names but specific experiences with his students going back nearly 50 years to when he began teaching. Even the weekend before he passed away, we were reading Facebook posts from some of his students and he not only remembered the students but had his own stories to share with us about many of them as well.” 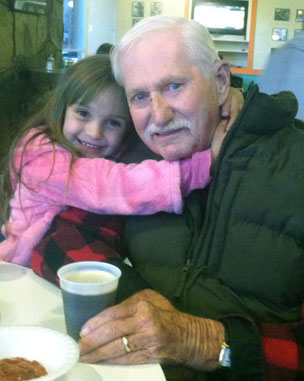 After Murphy retired in 1993, he became a substitute teacher for about six more years and also served as a “science wizard” by doing science experiments with students. Eventually he joined his neighbor, Kem Clark, the owner of Wikki-Stix, and ended up going around the world demonstrating the product. He and Judi visited 59 countries.

Judi Murphy was a homeroom mom and served on the PTA board. She was a Girl Scout leader for several troops, from Brownies to Senior Scouts. She and her husband led a group of Girls Scouts on a hike through the Grand Canyon, on camping trips in Arizona and a camping trip to Hawaii.

Three of Murphy’s four children grew up to be teachers or to work in education. His eldest son, John, has taught at Madison Meadows for 20 years. Jeff has been a minister for 25 years. His daughters, Jane Scott and Jennifer Schwarz, also went into education. Jane taught for 25 years and Jennifer works in the Department of Education at the University of California at Irvine.

“Our dad instilled in us a strong sense of moral values,” says John. “As we were growing up, he knew we weren’t going to be perfect and that we would make mistakes along the way, but he stressed honesty, honoring commitments, and doing the best you could.”

A lesson that still resonates today, not only with his own children but with the hundreds of kids who passed through his life over the years.