Local authors reflect on their inspirations

By Allison Walker
For local photographer Mara Blom Schantz, it was the untimely death of her own mother that motivated her to produce her second photography book, “A Celebration of Motherhood,” about the individual lives of local moms.

For neighborhood activist G.G. George, it was the destruction of 2,200 homes and businesses six blocks away from her own house that launched her passion for neighborhood preservation, which eventually led to her co-authoring a book about her own historic neighborhood. 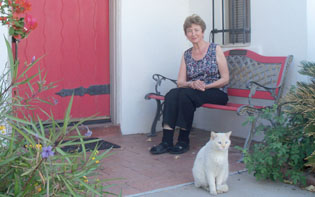 CAPTION IS: G.G. George and her cat, Snowball, sit in front of their historic home in Phoenix’s Encanto-Palmcroft Neighborhood. George recently co-authored a book about the history of this area, which in 2002 was named one of the 10 best places to live, out of a pool of more than 1,200 American cities, by Money Magazine (photo by Allison Walker).

About one and a half years is how long it took George and co-author Leigh Conrad to produce their new book, “Phoenix’s Greater Encanto-Palmcroft Neighborhood,” which will be available beginning May 5.

“But that’s because I had lived most of it,” explained George. “I was writing about a good many of my experiences.”

For George, her journey researching the history of the neighborhood she lives in began more than 40 years ago when the Arizona Highway Department began tearing down homes and businesses just six blocks from her house in order to build a new freeway.

“[They] were tearing down homes and businesses in the heart of Phoenix because the Arizona Highway Department said they had outlived their usefulness,” George recalled.

With the help of nearby neighborhoods, George was able to organize 2,000 homeowners into opposing the construction of the new freeway. It was an action that would forever change her life, eventually turning her into the neighborhood’s “unofficial historian.”

Similarly, Schantz’s inspiration for “A Celebration of Motherhood” was fueled by her own experiences from living in Phoenix. 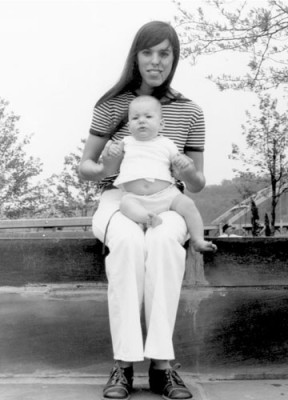 North Central Phoenix photographer Mara Blom Schantz dedicated her photography book titled “A Celebration of Motherhood” to her own mom, Chloe Beeson Blom, shown here with Mara when she was an infant (photo by John Blom, courtesy of Mara Blom Schantz).

“It was my mother, and my own journey as a mother,” explained the longtime North Central resident. She remembers her mother as being unconventional at a time when most were stay-at-home moms, and of giving each of her children a strong sense of responsibility.

Schantz’s book highlights not only the stay-at-home moms in the Valley but also businesswomen and business owners, like restaurant developer Kris DeMarco of Upward Projects, and even local television news anchor Carey Peña.

“A Celebration of Motherhood” is Schantz’s second photography book. She described the challenge of not only choosing which photos to fill the pages with, but in writing about the mothers themselves.

“The challenge was in writing about each of the women to do them justice,” she said. “They’re all inspiring in their own ways. I know many of them very intimately through my work on the book. Many have faced hardships with regards to their own lives and as mothers.”

George and Conrad’s book also is something of a photo album. After fielding pleas from Arcadia Publishing for five years, the two authors would finally assemble 200 images from George’s own collection, those of other neighborhood residents and the City of Phoenix to be placed in “Phoenix’s Greater Encanto-Palmcroft Neighborhood” (Arcadia Publishing, $21.99, www.arcadiapublishing.com).

“Our hope for the book is that it will educate people about how these houses came to be and why we want to preserve them,” George said.

As to why she, personally, feels so passionately about preserving her neighborhood, George said, “Every house is different. That’s what I love about [my neighborhood]. They all have their own unique personalities.”

George and Conrad will be hosting a book signing 1-3 p.m. Sunday, May 18 at Antiques on Central, 5037 N. Central Ave, northeast corner of Central and Camelback Road. Readers will have the opportunity to purchase the book and have it signed, as well as to speak with the authors.

Schantz’s “A Celebration of Motherhood” is already for sale at Amazon.com; MomBomb Boutique, 5021 N. 44th St.; and at Artistic Impressions by Mara Fine Photography Studio, 3117 N. 44th St. A portion from the book sales will be donated to the Ryan House and to Casa of Arizona.