Bob and Rob love corn on the cob, but Ella Mae Dobbs does not. So what in the world does that have to do with one lost and tiny robot? 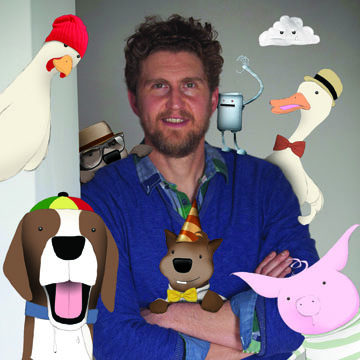 Welcome to the fun world of “Bob & Rob & Corn on the Cob,” the new children’s book by North Central author and illustrator Todd McQueen. The book, published by New York-based Sky Pony Press ($16.95), is the culmination of seven years of work by McQueen, a renowned illustrator and animator in the Valley who created every image and wrote every word of the book himself.

“Creating [the book] has been an incredible experience from start to finish,” McQueen said. “It was more work than I ever imagined it would be, but also has been very rewarding as I’ve worked to bring these characters to life on the page.”

Like many children’s authors, McQueen became inspired to create his own book through the experience of becoming a parent—McQueen and his wife Monica have two children, a 10-year-old daughter and an 8-year-old son.

“Bob & Rob & Corn on the Cob” is an educational and humorous romp into the world of two corn-on-the-cob loving squirrels who have a rabbit friend who is a bit of a snob when it comes to trying foods she doesn’t like. McQueen says the story will resonate with children who are picky eaters.

The book was released on May 1 and is available in most major bookstores. For more information, visit the McQueen Bros. website at www.mcqueenbros.com or find them on Facebook at mcQueenBros.

McQueen is not the only local children’s author whose light-hearted books also carry an important educational message. For Valley doctor Jerald Altman, it’s less about what children are putting in their mouths and more about what they are sticking up their noses or in their ears. 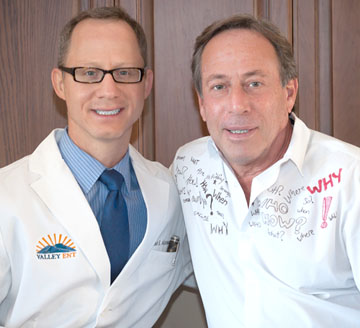 “Kids stick stuff where it doesn’t belong because they’re experiential learners and because they’re naturally curious—about what it feels like, and about what will happen,” explains Altman, coauthor along with Phoenix resident Richard Jacobson of the new children’s book, “Don’t Stick Sticks Up Your Nose! Don’t Stuff Stuff In Your Ears!” (ZonaBooks LLC, $12.50). “Some children may also be motivated by the fact that they know it’s naughty, or because they think it’ll be funny.

“Trust me, I’ve seen it all in noses and ears: rocks, candy, paper, peanuts, crayons, buttons, and beads … and the list just gets weirder from there,” admits Altman, a otolaryngologist-head and neck surgeon (ENT doctor).

One thing’s for sure: Kids don’t typically anticipate the dangers—or the ensuing parental panic—that comes with a Lego lodged in a nostril or a pea shoved into an ear. And by the time parents become aware of the problem, it’s definitely no laughing matter.

“Foreign (and often dirty) objects in a child’s nose or ears can lead to serious health risks,” warns Altman. “Those range from infections to blocked airways to punctured eardrums … things neither you nor your child wants to experience. And, of course, there’s the expense: co-pays, deductibles, and at times, general anesthesia.”

With colorful illustrations and fun rhymes, this 22-page board book written for children ages 2 to 6 is the perfect way to teach children not to put dangerous objects where they don’t belong.

Altman will be reading from and signing copies of “Don’t Stick Sticks Up Your Nose! Don’t Stuff Stuff In Your Ears!” 11 a.m. Saturday, Aug. 16 at the new Changing Hands Bookstore located at 300 W. Camelback Road. Children are welcome as there will be fun games and prizes as well. For more information, visit www.dontstickdontstuff.com.