By Patty Talahongva
“I was voted the shyest girl in the school,” recalls award-winning author and North Central resident Stella Pope Duarte, as she sits in her cozy living room filled with family photos, colorful art depicting Mexican images, and just a few of her many awards. She’s written five books and is working on a biography about civil rights leader Raul Yzaguirre. 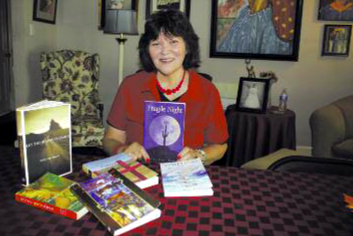 Stella Pope Duarte holds up the first book she wrote, which was nominated for a major writing award. Last month she picked up yet another prestigious award for her writing. A true native of Phoenix, she moved into the North Central area more than eight yeas ago (photo by Patty Talahongva).

Pope Duarte is about as local as one can get. Born and raised near 7th Avenue and Buckeye Road, she attended Lowell Elementary School, Phoenix Union High School, Phoenix College and then graduated from Arizona State University. Seated at a banquet table set up in the middle of her living room—to accommodate her grandchildren when they visit—she chats about her life and how characters from her past now show up in her books, including family members.

As one of eight children, Pope Duarte credits her parents for teaching her to love all people. Even though both were uneducated and the family was far from living a life of luxury, she recalls a TV news story about her neighborhood. “When I was in fifth grade the news came on the TV they said it was slum.” Only understanding that the people the television person was talking about were poor, she asked her dad, “Where are they? Let’s go help them.”

It was a lesson he taught her that she’s never forgotten: “Never let anyone tell you who you are. You tell people who you are by how you treat others and yourself.”

Decades later, it was a dream about her father that prompted her to start writing. In 1994, newly divorced with four kids and three jobs, the first book she wrote, “Fragile Night,” was a finalist for a Pen West Fiction Award. Since then the accolades and awards have accumulated including the American Book Award, Arizona Highways Book of the Year award, the Southwest Book Award, a Pulitzer Prize nomination, a Book Sense Nomination for Oprah’s List, and now Pope Duarte can add the Luis Leal Award from the University of Santa Barbara. The award was given to her on her mother’s birthday, Oct. 29, 2014.

“The awards have a lot of meaning to me,” she says. “They show me I’m going in the right direction.”

And they allow her to show other young writers what can come of dreams and hard work. Pope Duarte teaches writing to elementary and college students.

“It’s such an honor and joy for me to work with thousands of kids and see them express themselves in writing. Nobody every said to me, ‘You have a wonderful imagination.’ I wish as a child somebody had said that to me.”

It’s not uncommon for her to have as many as 19 rewrites before she’s satisfied with her story. “So when my students are crying over one or two revisions,” she shakes her head and smiles, “Oh please! It’s work but I will not release something until I feel I’ve done my best.”

She’s happy all four of her children are writers, too, and says it’s up to them if they want to get published.

For her, as a writer, there’s never “The End.” There’s always one more story to write, she says. Look for her books at www.stellapopeduarte.com or write to her at stellapopeduarte@cox.net. You can download her books from Amazon or Barnes & Noble.