By Karolina Jaron
North Central resident Jennifer Hecker DuVal can add another title to her list of accomplishments that include mother, clinical social worker and wife. That new title is “author.” 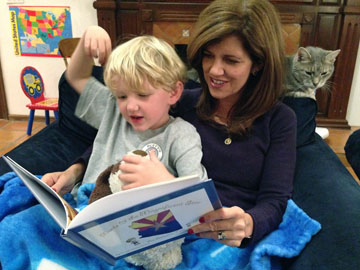 Jennifer Hecker DuVal reads her new children’s book, “Monte and the Magnificent Star,” to the inspiration of the book—her 6-year-old son, Monte—while Vanilla the cat looks on
(submitted photo).

“Somebody wrote me an e-mail and said their son never knew what the Arizona flag was or what it looked like, and after reading my book, he now always calls it the magnificent star,” Hecker DuVal said. “It gives me chills that my book is affecting people.”

Hecker DuVal said she thought the hardest part would be finding an illustrator and bringing her book to life, but that turned out to be the easiest part because of her vision about what she wanted her book to be like. Illustrator Sara Ruhe’s ability to immediately compose what Hecker DuVal had envisioned was “phenomenal,” she said.

“I’d like it to be like Christopher Robin and Winnie the Pooh,” Hecker Duval recalled telling Ruhe in a phone conversation. “I want the adventure with Dog-dog like that.”

The main characters are Monte and his best pal, Dog-dog, who turn readers into explorers by taking them on their journey across Arizona.

Hecker DuVal wrote the book last summer. She found a voice and purpose for the character of Monte through her 6-year-old son of the same name. Her goal was to convey her love, pride and appreciation for her home state through the eyes of a 5-year-old boy.

“What I really had in mind was to inspire children through Monte,” Hecker DuVal said. “How great would it be for his generation to feel excited about where they come from and to be able to talk about it?”

This book is for anyone who has love for the outdoors, exploration and adventure. It sparks adventure within hearts and makes you fall in love with a state that is much more than just a desert, Hecker DuVal said.

Hecker DuVal found a way to get the book published without having to give away any rights. She and her husband, 2014 Democratic gubernatorial candidate Fred DuVal, aim to get “Monte and the Magnificent Star: An Arizona Tale” into every single public school and library in the state.

“Our main push is to provide every child with access to the book so that they can learn about the state and be proud,” Hecker DuVal said. “We published it the way we did so that we can get it to anyone we want to have it.”

She has ideas for future books in which Monte and Dog-dog explore other states, but she wants to enjoy the presence of this one first.

Changing Hands Bookstore at 300 W. Camelback Road carries the book as well as Write-Ons at 7th Street and Rose Lane. The book also can be purchased at Amazon.com.

Editor’s note: Karolina Jaron is a journalism student at the ASU Walter Cronkite School of Journalism and Mass Communication.