Help the homeless, elderly this summer

Scorching temperatures are a health hazard to the Valley’s homeless and elderly shut-ins, and one nonprofit organization is mobilizing to prevent heat-related deaths and illnesses among this vulnerable, growing population. 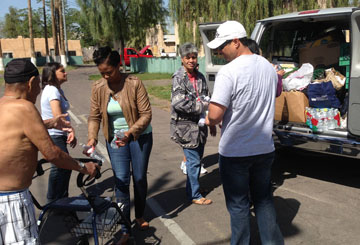 Volunteers with Phoenix Rescue Mission’s Hope Coach hand out heat-relief items, including bottled water, to members of the homeless community during the summertime (photo by Cliff Danley).

Arizona ranks as the fourth-worst state in the nation for homelessness. A startling 13,248 men, women and children are homeless in Maricopa County, according to the most recent Maricopa Association of Governments street count and point-in-time shelter data. In addition, Phoenix was identified in a national HUD survey as one of the few places in the U.S. where the homeless street population grew by 11 percent in 2012 as compared to 2011.

“Last year’s summer heat was deadly, and we need to plan now for another long stretch of extreme triple digit temperatures,” said Jay Cory, Phoenix Rescue Mission president and CEO. “It’s critical that we help homeless people on the streets. Many are battling addiction challenges, which means they are already severely dehydrated because of their substance abuse. Combine that with extreme heat and it can be fatal.”

Volunteers are needed to help with distribution efforts and other tasks. Monetary donations also are requested, particularly in May when the Mission qualifies for a matching grant made possible by several friends of the Phoenix Rescue Mission that ends May 31.

Public drop-off sites for water, socks, sunscreen, hats, toiletries and other heat relief items are located throughout the Valley. For a complete list of items needed and drop-off locations, visit www.phoenixrescuemission.org or call 602-233-3000.