The Foundation for Blind Children, 1235 E. Harmont Drive, on Oct. 31 hosted a groundbreaking ceremony for its new 35,000-square-foot school and gymnasium, which extends the campus all the way to Northern Avenue.

“This building is not only an addition to our campus, but a step in building for our next generation of students to receive the quality education they require and deserve,” said Marc Ashton, CEO of Foundation for Blind Children. 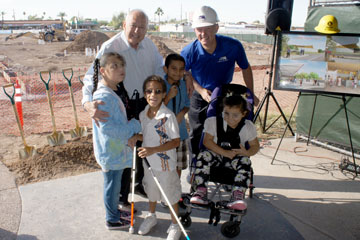 Don Tapia, left, a longtime supporter of the Foundation for Blind Children, and the nonprofit’s CEO Marc Ashton celebrate the campus’s $10 million expansion with some of the children who attend FBC (photo by Teri Carnicelli).

Ashton’s son, Max, has peripheral vision and little central vision. For many years he was a regular visitor to the FBC. Both father and son are graduates of Brophy College Preparatory.

Ashton, who was a former board member for the FBC before becoming its CEO, is passionate about the work the FBC does, not just for sight-impaired teens like his son, but for all visually challenged youth in the state.

“We are a national leader in the blind community, and we have the largest preschool for the blind in the country. We became the biggest because of our drive, our courage, and our stewardship,” Ashton said.

The nonprofit started out as just seven classrooms in the 1950s and has grown substantially since then, in both space and services. FBC has 13 programs serving 2,000 students and patients from birth to 101 years old.

Ashton pointed out that each child who attends the preschool and continues on in the FBC community will grow up to enter the workforce or become a self-sufficient, productive member of society, which saves the government millions of dollars.

Ashton explains that there is just over $1.4 million in taxpayer savings per FBC student, based on adding the disability payments a blind person starts receiving at age 18 through 67 (when retirement social security typically starts), plus the average social security and Medicare taxes the average American and their employers would pay over the course of their working lives, plus average Medicaid/Medicare benefits.

“We are preparing the next generation of visually impaired individuals to become active members of society,” said Jacob Brown, FBC board president.

Other guests in attendance at the groundbreaking included Phoenix City Councilman Bill Gates and representatives of Lockton Companies and Del Webb Foundation, two major donors to the project.

Don Tapia, a longtime supporter of FBC, himself has gone through a retinal tear and subsequent surgery in each eye. “One thing we take for granted in our sight, and yet we do everything with it,” Tapia pointed out.

He praised FBC for helping not only those who were born sight impaired but those who loss some or all of their sight due to accident, disease or some other condition. Tapia also announced that he was bequeathing $1 million to FBC.

The cost of the expansion is approximately $10 million, and thus far FBC has raised about half. Construction should be finished by August 2015. The construction management is Kitchell, and the general contractor is Haydon Building Corp. For more information, visit www.seeitourway.org.