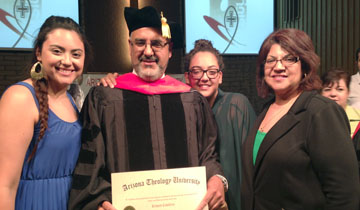 Joel Hernandez, the university’s president, presented the degree to Caballero as recognition for his many years in the ministry and his devotion to the field of educating Hispanic pastors and the creation and leadership of Spanish-language congregations within the RCA (Reformed Church in America) and the CRC (Christian Reformed Church) denominations.

Originally from Montevideo, Uruguay, Caballero moved to Toronto, Canada, where he was instrumental in starting and serving the first Hispanic congregation for The Church of the Nazarene in Canada and later planted the Brampton Hispanic Church of the Nazarene in Canada. His theological education includes degrees from the Toronto Nazarene Bible Institute and Canada Christian College.