A garden blooms at Beatitudes Campus

By Teri Carnicelli
It was no coincidence that members of the Beatitudes Campus Garden Club chose to show off the fruits of their labors on Earth Day. Visitors and residents of the not-for-profit, continuing care retirement community were invited on April 22 to a barbecue and tour of the extensive garden, which covers a long stretch of where an abandoned alley used to be inside the 22-acre campus, located at 1610 W. Glendale Ave. 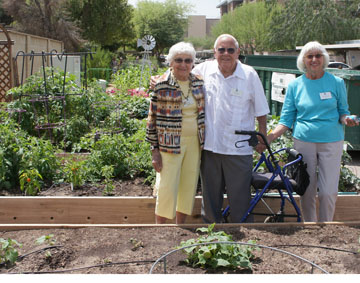 Showing off the impressive vegetable garden beds at the Beatitudes Campus are Garden Club volunteer Lou Hanson, Garden Club founder Lowell Bailey, and his wife and club volunteer Joannie Bailey, who he met—and married—after moving to the campus (photo by Teri Carnicelli).

The garden was the brainchild of Beatitudes resident Lowell Bailey, who says he always had a backyard garden throughout his life and didn’t see why he should stop just because he no longer had a backyard to speak of.

Though his career path led him to teaching physical education and coaching a variety of sports, Bailey always had a love of the land. He volunteered as a docent at the Desert Botanical Garden until recently and was instrumental in planning and organizing a fundraiser for the garden’s education department, earning a significant amount of money used to bring Title One kids to the garden.

Bailey, a Tucson native, moved to the Beatitudes in 2009 and shortly after started petitioning the powers-that-be for a small garden plot. The V-shaped abandoned alley that was not only an eyesore but also a waste of space looked like just the spot he needed. Bailey, who will turn 87 in June, found like-minded residents who were also gardening enthusiasts and who were more than ready to pitch in on a garden project. Soon the Beatitudes Garden Club was formed.

Funding for the Community Garden comes from individual club dues and donations, grants, and a budget of $5,000 annually from the Campus Auxiliary.

“We started in 40-foot increments,” Lowell recalled. A greenhouse was erected, and a composting area was set up next to it. Then the alley’s soil was tilled and several tons of organic compost was layered over it.

Over the course of five years, the garden has spread to include a waterfall, windmill, patio, 20 fruit trees, a variety of flowers, as well as 21 raised-bed, 4-foot by 12-foot plots. Many are for the Beatitudes community to enjoy, and some are “private plots” belonging to individual residents, who also share their abundance with Beatitudes members.

More than 20 residents volunteer year-round to plant and harvest vegetables that are offered to all residents weekly, in “veggie stations” located inside each building on campus. The spring harvest will include organic tomatoes, corn, squash, potatoes, onions, zucchini and more than two dozen herbs.

Last year when there was an abundance of vegetables, 100 pounds of tomatoes were donated to St. Vincent de Paul and St. Mary’s Food Bank.

Bailey isn’t able to do much of the physical work, like the tilling and hoeing, but “the vision is still there, and the love is still there,” he says. And it was his vision that created a beautiful and bountiful garden that hundreds can now enjoy.