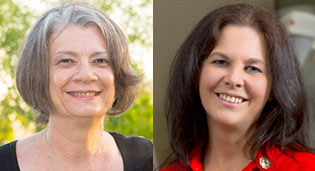 In 2013, Ausbun served many weeks helping victims of Hurricane Sandy, Illinois and Oklahoma tornadoes and Colorado floods as well as the Yarnell Hill wildfire in Arizona during which 19 firefighters died.

One of the toughest but most rewarding jobs that Ausbun has done with the American Red Cross has been working on the National Integrated Condolence Teams.

“I have been able to advocate and provide assistance to clients who have lost family members during a disaster,” said Ausbun who has been volunteering for about four years.

Forbes, a Phoenix native, received the Anchor of Hope pendant designed by Addison-Taylor Fine Jewelers of Scottsdale and presented by owner Scott Berger on behalf of the Red Cross at a March fundraiser for the organization.

Since 2010, Forbes, a certified public accountant, has served as chairman of the Audit and Risk Committee for the International Federation of Red Cross and Red Crescent Societies. She has served in various volunteer leadership roles for the Red Cross including National Chairman for Volunteers from 2006 to 2010. Her volunteer work with the Red Cross has taken her to nearly every state in the United States and four continents.

Forbes said that the work that volunteer auditors do behind the scenes is not as visible as volunteers helping victims of disasters or people donating blood. But the work they do is vital because they help instill the public’s trust in the American Red Cross.

For more information about becoming a Red Cross volunteer, go to www.redcross.org/gcc.