Young burn victims attending this year’s “Camp Courage” in Prescott were greeted their first day of camp with a new pair of athletic shoes, thanks to a generous donation from Kitchell. 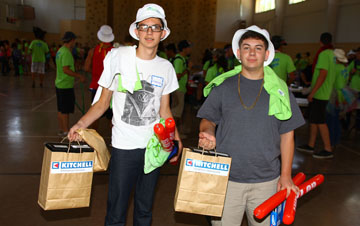 Camp Courage 2014 attendees Emmanuel Serrano, left, and Jonathon Valenzuela pick up their swag on the first day of camp, including a free pair of new athletic shoes donated by Kitchell (photo by Rick Apple).

The company purchased, sorted and labeled 96 pairs of shoes for the campers, mostly teens, who attended the annual camp in June. Many of the children were from backgrounds in which new athletic shoes are a luxury. The camp is offered through the Arizona Burn Foundation, part of the Arizona Burn Center at Maricopa Medical Center.

“It’s difficult for us as builders to deal with the intense summer heat in Phoenix, but for burn victims the effects are much more profound, because their skin suffers heightened sensitivity to sunlight,” explained Kitchell CEO Jim Swanson. “It’s great that these young kids can go to cooler climates, escape the heat, and just be regular kids.”

Camp Courage offers activities such as hiking, horseback riding, archery, canoeing, fishing, arts and crafts, rappelling and more. The majority of the children who attend camp are from Arizona. This year there are were four children from Calgary, Canada and two from Hermosillo, Mexico as part of the Sister Cities program.

Kitchell’s focus on safety is built into its culture and values, and the opportunity to make sure the camp attendees had safe footwear was a natural fit, Swanson said. Company representatives loaded the supply truck with the shoes, sunblock and lip balm prior to the kids departing for camp.

Kitchell has supported numerous causes over the years and is ranked as one of The Business Journal Top 10 corporate givers in the Valley. The company is consistently ranked as a “Best Places to Work,” a “Most Admired Company” and is among ACE top private companies in Arizona. The Phoenix-based building company has 12 offices in metropolitan areas throughout the country. More information can be found at www.kitchell.com.