“One moment on one night can change your life forever,” remembers North Central resident Ed Purkiss.

The night he is referring to, which changed the entire course of his life, started out quite normally, however.

“My wife, Mary, and I together ran a rather successful call center business in the early 2000s. As we got ready to host our annual company Christmas party, I noticed an odd lump in Mary’s breast that was not there before,” Ed recalls. 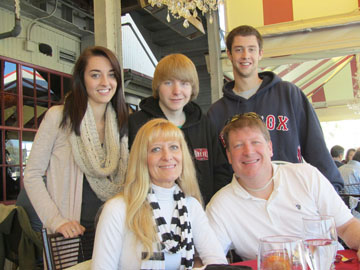 Nervous, he convinced Mary to at least get it checked out … just in case. When Mary visited her doctor, she ended up having to have a needle biopsy. Still healing from it, the doctor called days later and gave Ed news that would rock their world forever.

Less than three weeks later, Ed sat in the hospital watching as Mary was taken away for surgery—a mastectomy. And it wouldn’t be the last time he did so. The healing process, and resulting reconstruction, took two years.

“During that time, we decided to sell our business to focus on both Mary’s cancer battle and the children,” explains Ed, noting that selling the business was a blessing in disguise as it turned out Mary needed six surgeries as part of her reconstruction process, during which time her father was diagnosed with lung cancer as well.

The entire family’s life revolved around doctors’ offices for the better part of two years, as the Purkiss family got to know all too well the perils the medical industry faced with impending mandatory regulations, including the movement toward electronic records—and how it directly impacted patient care at the scariest times in their lives.

As Mary healed, both she and Ed were motivated to action.

Because they had experience in running a highly efficient business and were comfortable with rapidly changing technology, the couple counted themselves fast friends with some doctors and eventually ended up as paid consultants to radiation oncology practices.

As they quickly found, many medical practices were being taken advantage of by technology companies and others, charging 20 times as much as they should for simple storage, upkeep and usability of medical information and records electronically.

So, as they consulted in business matters with several local doctors, they studied the issues each had over and over with “the cloud,” online storage and more. By 2008, the Purkisses had a good grip on the process and were increasingly handling their doctor clients’ technology needs as well. The time seemed right to launch their own venture in Central Phoenix: Iron Medical Systems (www.iron-medical-systems.com).

In that first year, the Purkisses—working from their home—had three clinics as clients. They have since grown the still Central Phoenix-based business to more than 70 clients and medical clinics across the country. “We are actually in the process of expanding to the East Coast to keep up with all the work we have out there,” says Ed.

Their Iron Medical System cloud product allows physicians to work anywhere from any device. The system is built to run efficiently and backs up constantly. The cost of the system is lower than if clients bought the hardware themselves and tried to comprehend it all. It does not replace practice tech staff either—just helps them become more efficient.

Through their own years-long cancer battle, this couple is now motivated to ensure no one else has to go through what they did—and that doctors are better armed with secure technologies so that they can focus on what really matters: patients and their care.

Mary has added the role of “activist” to her daily life as she sits as president emeritus of Arizona Institute for Breast Health (AIBH), a local nonprofit focused on getting women access to second opinions on breast cancer treatment options, completely free of charge.