Business helps you do it yourself

By Kelcie Johnson
He had a pest problem, but could not afford a quality exterminator while supporting his growing family. He tried the department store, but the products didn’t eradicate the vermin. The problem continued. He knew there had to be a better way … and that is how the business started. 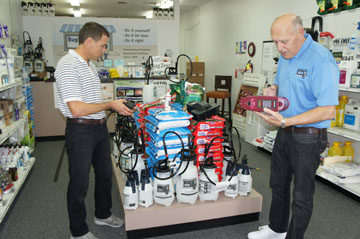 Joe LaBrie, left, and his dad Jim LaBrie set out some of Bug & Weed Mart’s popular fall items, including rodent traps. The fall season in the Valley sees a typical increase in both rodents and termites for homeowners (photo by Teri Carnicelli).

“We developed a protocol that people can follow easily and do the exact same thing as a good professional,” LaBrie said. “We give each customer a prescription, in a sense. We write a specific formula of stuff they need based on their size of home or whatever their problem is so they have the exact dosage to use written right on the product. If they follow the written instructions, the results are pretty predictable.”

With temperatures in the 70s, fall is the perfect time to get out in the yard and eliminate and prevent weeds and pests yourself, and save some money by not using a service company. LaBrie said the most important thing to do is remove debris and clutter, including piles of leaves or wood and citrus. Clutter and objects that don’t move serve as shelter for pests while citrus is a food source, particularly for rodents.

“Some of the things that people can do that doesn’t cost anything but a little energy, is to keep the back yard and front yard and the shrubbery and everything cleaned up,” LaBrie explained.

In the fall the most common pests are termites and rodents like rats or mice. Bug & Weed Mart sells products to eliminate these pests. The most popular technique to exterminate rats are traps where the enclosed box holds a deadly trick inside, like poison or electricity, making it lethal for the rat, but child and pet safe.

“We show people how to do this stuff and, by golly, it works.” — Joe LaBrieTermites also are active in the fall and winter. They thrive near a water source, like a leaky faucet or hose valve. To prevent termite activity a two-year granule can be applied at the base of the house.

There are fewer weeds to pluck in the fall and winter. The trick is to apply a special chemical called pre-emergent during these months to prevent seeds from germinating later.

“I attribute our success to our personal service and the education we provide our customers, delivering affordable DIY solutions,” LaBrie said. “We show people how to do this stuff and, by golly, it works.”

This unique service and guided approach to pest control supported Bug & Weed Mart through the recession. In fact, there are now five Valley locations, including on Central Avenue just north of Camelback Road. That location opened in 2010. LaBrie or his son, Joe, can often be found manning the counter at the Central Phoenix shop.

Editor’s note: Kelcie Johnson is a journalism student at the ASU Walter Cronkite School of Journalism and Mass Communication.