Business cares about people and the planet

By Teri Carnicelli
North Central resident Steve Lopez has been around automobiles all his life. “In the town I grew up in, I worked at an antique car museum where I learned about all aspects of the auto industry from the 19th to the 20th Centuries,” recalls Lopez, who went on to race open-wheel cars through the 1990s. 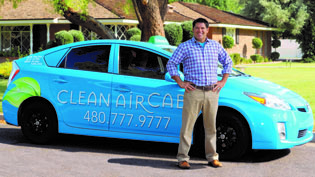 Steve Lopez, who grew up around automobiles, launched his Clean Air Cab company in 2009 with the idea of doing something better for the environment, better for his customers, and better for the community—through an ongoing donation program
(submitted photo).

He learned about the newest automobile innovations into and through the 21st Century, including fuel injection and computerization of all automobile systems like data acquisition, ABS brakes, and hybrid technology. So it wasn’t too out of the box when he and his wife, Ginger, decided to launch a new cab company with a unique concept: a triple-bottom-line business model of people, planet and profit.

Since its inception in 2009, Clean Air Cab’s mission has been to make it affordable and convenient for everyone to go green by offering green cabs at less expensive rates than traditional cab alternatives. And it’s worked.

“We invested into a 100-percent Toyota Prius taxicab fleet, the first—and only—in the city, and we have never looked back,” Lopez says.

What they continue to do, however, is look forward—and also, pay it forward. From the inception of the business, the couple decided to choose four organizations in the community to which to donate on a regular basis, in most cases by donating a $1 of every cab ride to these special causes.

“Right now we give back to ASU in the form of a yearly scholarship for a School of Sustainability student; we have given this scholarship since 2010,” Lopez says. “We also give to One Community, for workplace and business gender tolerance and equality, since 2012. We help out the United Way of Mesa with a cab that donates to their Community Chest monthly, since 2010.”

Also since 2010, Clean Air Cab has provided free taxi rides to and from Phoenix Children’s Hospital for financially struggling families whose children are undergoing treatment.

It is this outreach, in partnership with its customers, that recently garnered Clean Air Cab a finalist position in the 18th annual Spirit of Enterprise Awards, given by Arizona State University’s W.P. Carey School of Business. Winners will be announced on Nov. 21.

The awards recognize companies that boost Arizona’s economy, create jobs and deliver excellent customer service. Judges also look for innovation, a positive internal culture, and an impact on both the economy and the local community.

“It’s been surreal; we knew our concept was solid and could support many different business models, but to have our cab company mature and grow into what it is today is an absolute humbling experience,” Lopez says. “We could always do more and take more customers, but for a family-owned business, we are consistently happy with the customers who choose to use Clean Air Cab.”