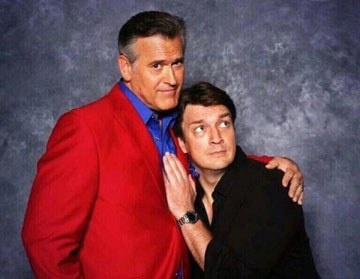 Movie and television actors Bruce Campbell, left, and Nathan Fillion are two of the headliners at this year’s Phoenix Comicon, set for June 5-8 in downtown Phoenix
(photo courtesy of Bruce Campbell).

Comicon presents guests and programming for hobbyists by attracting the top segments of the comics, anime, sci-fi, film, TV, and gaming industries. Entering its twelfth year, Phoenix Comicon is expected to draw more than 65,000 attendees to downtown Phoenix.

A membership pass for all four days is $70 in advance online. Individual day passes range from $15 to $40. Children 12 and younger are admitted for free with paid adult (limit two children). For more information, go to http://www.phoenixcomicon.com.