Actors Theatre is launching a two-show summer schedule to help fill at least one empty theater stage during a time of year that has historically been very quiet. 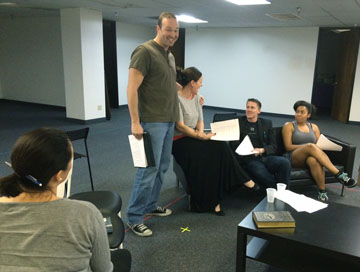 Both contemporary comedies, each written by a woman playwright, will feature the same cast.

In “The Book Club Play” by Karen Zacarías, a group of friends welcome a new member to their book club, only to see him tear at the fabric of their longstanding relationships. Structured as a documentary film with “character interviews” interrupting the action and with projected out-takes from the film’s final cut, “The Book Club Play” is a sly examination of social groups, ritual and the true nature of friendship.

Sandy Rustin’s “The Cottage” is a tale of love, sex and betrayal. The two-act story is set in the English countryside in 1923 where Sylvia Van Kipness decides to expose her love affair with her husband’s brother. The true meanings of fate, identity and marriage are all called into question as a surprising and hilarious web of secrets unravel in this ridiculous, potentially murderous and romantic comedy.

Tickets can be purchased online at www.actorstheatrephx.org. Prices range from $18 for students (with ID) to $45 for reserved seats. For more information, call 602-888-0368.