‘Evidence of Life’ Exhibit
6 p.m. Fridays, Sept. 5 & 19
R. Pela Contemporary Art
335 W. McDowell Road
602-320-8445
“Evidence of Life: New Paintings by Jason Hugger with Sculpture by Brad Konick and Thad Trubakoff” features established and emerging artists. Hugger’s new series of paintings was inspired by his visits to the Middle East. Konick’s sculptural pieces are about the balance of opposites. Trubakoff creates interactive sculptures that recall other objects. The show will remain on exhibit through Sept. 28 and is otherwise open by appointment only.

Valev Exhibit Opening Reception
6:30-8:30 p.m. Friday, Sept. 5
@Central Gallery,
Burton Barr Library
1221 N. Central Ave.
602-262-4636
The gallery hosts an exhibition of mixed media works by Steve Valev, titled “Quinn’s Wanderings: Of Books and Cities,” through Oct. 15. The band Woodworks will perform, providing a mix of rock, folk, blues, indie and alternative music. The free reception is sponsored by Friends of the Phoenix Public Library. Born in Bulgaria and with a background is in architecture and urban design, Valev’s interests are in the ways that those fields can engage topics of politics, sociology, economics and everyday life. Visit http://phoenixpubliclibrary.org.

Captain Jack’s Space Attack
10:30 p.m. Sept. 6 & Oct. 4
Space 55
636 E. Pierce St.
www.space55.org
By Charlie Steak and Ron Foligno, featuring more of the adventures of Captain Jack and his band, Space Attack, as they explore the galaxy searching for a new home after the destruction of Earth in the year 3013. Also featuring a revolving cast of the denizens of whatever planet(s) are featured in each episode, and audience participation. Live music! Drinking songs! Meteorite attacks! Tickets are $5 at the door.

‘Judaism in the Desert’ Exhibit
1 p.m. Sunday, Sept. 14
Cutler-Plotkin Jewish Heritage Center
122 E. Culver St.
602-241-7870
The public is invited to the free grand opening of “Judaism in the Desert: Jewish Congregational Life in the Valley and Northern AZ, 1920-Present,” on display through Aug. 1, 2015. The exhibit emphasizes the diversity of congregational life and what it means to be Jewish in Greater Phoenix and Northern Arizona. The gallery will be open from noon to 3 p.m. For more information, visit www.azjhs.org.

‘Radio Golf’
Black Theatre Troupe
Sept. 26-Oct. 12
Helen K. Mason
Performing Arts Center
1333 E. Washington St.
602-258-8129
It’s 1997 and an Ivy League-educated lawyer-turned-developer is running to become Pittsburgh’s first black mayor. Along with his ambitious wife and a college friend who is a banker, he wants to redevelop a poverty-stricken section of the city. It turns out that one of the houses to be demolished has a significant and mysterious past that none of them could have ever imagined. Visit www.blacktheatretroupe.org. 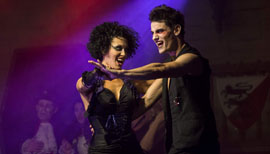 OctubaFest-CANCELLED
2 p.m. Sunday, Oct. 5
First United Methodist Church
5510 N. Central Ave.
www.firstchurchphx.org
The Arizona State University Tuba Euphonium Ensemble will perform a variety of music to celebrate the month of October, including original works such as Elizabeth Raum’s “A Little Monster Music,” and arrangements for tuba and euphonium ensemble that include Modest Mussorgsky’s “Night on Bald Mountain” and the Finale from Symphony No. 4 by Tchaikovsky. The concert will conclude with a set of polkas and marches to celebrate Oktoberfest. *NOTE: THIS EVENT HAS BEEN CANCELLED!

‘Vanya and Sonia and Masha and Spike’
Arizona Theatre Company
Oct. 9-26
Herberger Theater
222 E. Monroe
602-256-6995
The hilarious winner of the 2013 Tony Award for Best Play. In rural Bucks County, Pa., Vanya and Sonia have frittered their lives away in their family’s farmhouse full of regret, angst and the alarmingly ambiguous prophecies of their housekeeper Cassandra. Enter their sister, self-absorbed movie star Masha, with her boy-toy Spike, and the stage is set for an absurd weekend of hilarity and global warming. Contains mature language. Visit www.arizonatheatre.org.

The Music of ‘South Pacific’
ProMusica Arizona
Oct. 10-12
Herberger Theater, Stage West
222 E. Monroe
602-252-8497
ProMusica Arizona presents the concert version of Rodgers & Hammerstein’s massive hit. This award-winning classic is set in an island paradise during World War II when parallel love stories are threatened by the dangers of prejudice and war. There are moments of joy, discovery and loss in this historic musical. The performance features the ProMusica Arizona Chorale & Orchestra along with professional singers in leading roles. Tickets are $40 plus fees and are available at www.herbergertheater.org.

Susan Boyle in Concert
8 p.m. Friday, Oct. 17
Orpheum Theatre
203 W. Adams St.
877-840-0457
The exclusive 21-city tour stops in Phoenix on a coast-to-coast kick off of two-time Grammy nominee Boyle’s first U.S. tour. She will be performing a contemporary repertoire of iconic album tracks and never-heard-before classics. After dazzling judges on Britain’s Got Talent, Boyle soared into the spotlight with 300 million YouTube hits and counting. She has No. 1 albums in over 40 countries and has sold more than 22 million albums worldwide. Tickets are $47 to $97 plus fees. For tickets, call or visit http://phoenix.tickforce.com.

‘Seminar’
Actors Theatre
Oct. 24-Nov. 9
Helen K. Mason Performing Arts Center
1333 E. Washington St.
602-888-0368
This provocative comedy from Pulitzer Prize-nominee Theresa Rebeck follows four aspiring young novelists who sign up for private writing classes with Leonard, an international literary figure. Under his recklessly brilliant and unorthodox instruction, some thrive and others flounder, allegiances are made and broken, sex is used as a weapon and hearts are unmoored. Ticket prices range from $34 to $45 for reserved seats, plus fees. Visit www.actorstheatrephx.org.