Home / Community / North Central man is 101, like the state

By Deanne Poulos
“I’m the same age as Arizona,” announces Vaughn Sears. His birthday was Aug. 16, and he’s now 101 years old—still living on his own in his North Central Phoenix home of 50 years. 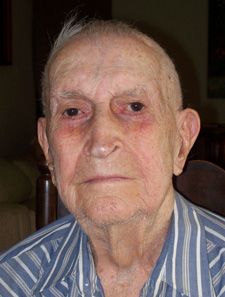 He moved his family to Phoenix in 1959 because his wife had emphysema. They moved a few blocks to his current house in 1963.

“This out here was in the county, not the city yet,” he recalls. “Indian School was the edge. The streetcars ran there.”

For 17 years, Sears worked for the city of Phoenix. “A lady from Social Security is coming to prove my age,” he says. “I’ll show her my driver’s license and my army discharge.”

His car remains in the carport, though he ceased driving a few years ago, in his late nineties.

“We used to go to the drive-in over there at 7th Street and Missouri, Cinema Park,” he reminisces. “The girls used to sit out on the hood of the car and have popcorn.”

His two daughters went to Madison No. 1 and to Camelback High. Both graduated from Arizona State University. Debbie is retired from teaching, living in Tucson, and is the mother of his two grandchildren, Joel and Sarah. Mary Ann, an artist, lives in Prescott.

They stay close to their father. “The girls trade off coming every other week,” he says.

His sister, Lois, his only living sibling, says longevity is on their mother’s side. When she comes to visit from Denver, they’ll dine at Beckett’s Table, the restaurant of his next-door neighbors, Justin and Michelle Beckett.

Sears also likes to eat at Jordan’s Mexican Food. The matriarch, Mary Jordan, has lived a few houses down since 1959. She turned 100 this past May, he says.

Sears is still planning ahead. “I’ve been wondering how long I’ll live,” he muses. “They say you live till you die. I just take it as it comes.”